In this first chapter, Drucker provides a survey that demonstrates the evolution and emergence of graphics as a means of communicating, representing, and producing information. Doing this chronologically, she begins by detailing a problem central throughout the chapter — that graphics historically (and even today, to a lesser extent) were not organized by an overarching “language,” by which she means that they did not follow a systemized grammar of syntax and semantics. In this vein, she describes historical reservations to using visuals as a form of knowledge communication, paraphrasing the sixteenth-century mathematician René Thom as noting explicitly that “visual codes are notoriously unstable, too imprecise to communicate knowledge with certainty” (23).

She dismisses this idea, however, that graphics cannot be an effective method of communication, first by noting that throughout history visuals have been used as a means of communicating knowledge, often when other methods were insufficient. She then, through the rest of the chapter, goes on to describe different attempts at creating a “language” of graphics. Towards this end, she begins by discussing the nineteenth-century early attempts at creating organized guidelines for graphics to be used in engineering and other industries. From this she explains how Design emerged as a separate discipline from the visual arts, primarily concerned with constructing graphics that, based on these emerging guidelines, had a primary purpose of communicating information.

Drucker goes on to describe the various attempts at creating this graphical “language,” mentioning that many of the graphical principles we take for granted today were only developed starting in the mid-20th century. After surveying these various methods of classifying visuals, she begins discussing video and interactive interfaces, concluding by introducing the topic of the remainder of the book: an analysis of the components that make up interfaces and information visualizations.

I decided to look a bit more into Owen Jones’ 1856 The Grammar of Ornament, which was the encyclopedia of different graphic motifs. Given its time of publication, it is clear why this work is so important, even without considering its massive scope. As Drucker mentions, there was not much of an organizational system for graphics at this time, let alone attempts at creating a set of graphics principles. This seems to be one of the first attempts at organizing graphics, and though the work only catalogs and does not outline explicit graphics principles, the organizational structure makes such hidden principles easier to see and to outline. Some example pages (from www.thegrammarofornament.com) are: 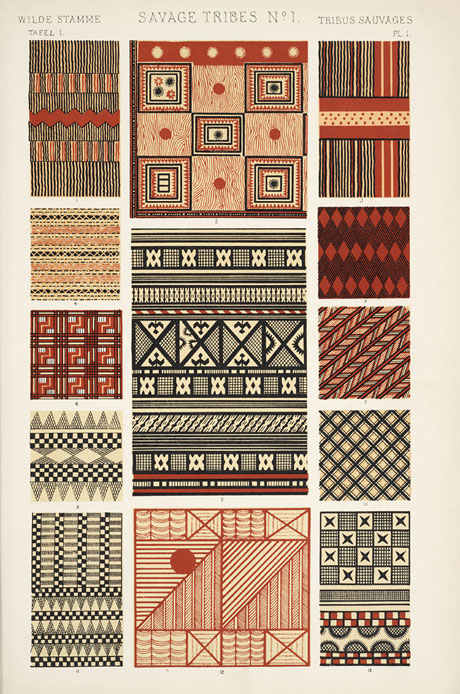 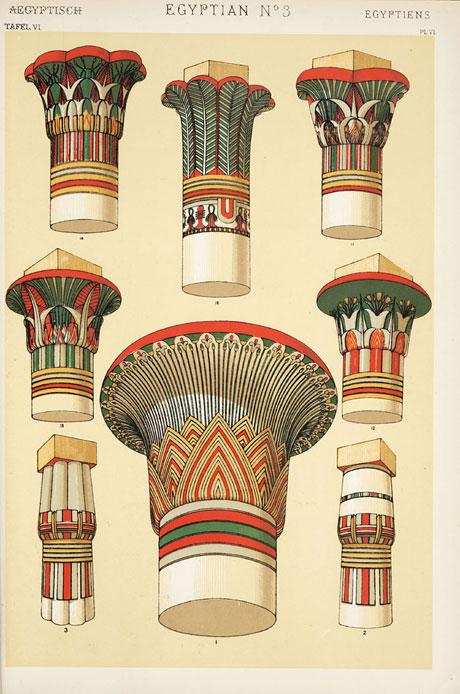 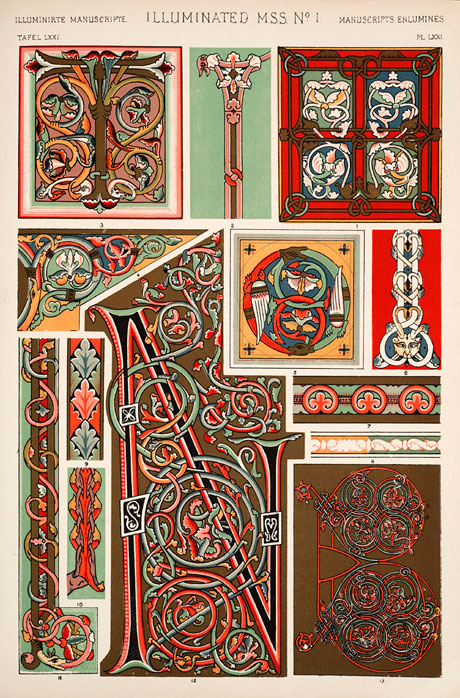 The range of the collection can somewhat be seen in these examples with graphics varying from "Savage Tribes" to "Egyptians" to western "Illuminated Manuscripts."