In the overview and first chapter of Graphesis, Johanna Drucker defines her title subject as "the study of visual production of knowledge." She describes this as a field still very much in its infancy compared to say linguistics or mathematics, and is the product of multiple disciplines converging. While certain disciplines enjoy maturity such as graphic design or statistical graphics, Drucker is making a point that the humanities has not begun to reach or even fathom its potential using visual knowledge systems. Thus where "interpretation", "ambiguity", and "qualitative judgement" are present, humans have favored & trusted existing forms (mostly linguistic) over graphical ones.

A review of historical developments show how progress has some progress has been made in different disciplines. For example, architecture and physiognomy have developed visual forms. Together with advances in physical sciences and studies of fine arts, "visual languages" have emerged, becoming codified in guides and manuals, many in attempts to define "universal" principles.

Drucker writes that many of these guides are meant to codify methods of production, which for example led to modern graphic design and mass market publications and advertising. As developments in understanding of human vision and perception evolved, principles like Gestalt were defined. Drucker notes this is rooted in a modern desire to identify universal principles that apply in all cultural circumstances. So the biggest advances so far made to date that will support "graphesis" in the future have been thus far rooted in placing high values on objectivity and repetition of production.

In the age of computers and the web, information visualization continues to use familiar forms (charts, diagrams, etc.) . I think Drucker makes a fair argument that "presentation of facts" still is taking precedence over attempts at representing other concepts & ideas. Her list of these concepts on page 22 ("Workings of Power", "Force of ideology", "transmission of values") seems like a challenge to those who wish to communicate about such topics.

Disagreement: Page 24 - "visual images are not governed by principles in which a finite set of components is combined in accord with stable fixed and finite rules." If the statement is "all images" than yes, but what about something like Wilikinson's Grammar of Graphics, which became the foundation of R's ggplot2, which would seem to exactly fit the definition of what Drucker describes?

Points of concern for discussion:

1.   Drucker uses "humanistic" without defining the term. What is meant by "serving a humanistic agenda"? That could have several interpretations. Is it traditional arts & letters? Or perhaps a simple reference to "human wants and needs"? Or something else?

2.   What is meant by "And, or Not carry an almost infinite number of qualifying attributes that make each instance distinct." (page 54-55) This sentence is confusing.

3.   Drucker states an objective to "De-nautralize the interface that has become so habitual in daily use" Is this a reference to graphical user interfaces referenced a page earlier? And is this a call to end interfaces all together or simply replace them?

I chose Leonhard Euler's and Stephen Wolfram's drawings of the Konigsberg Bridge problem. (Page 54-55 of Graphesis). I think there are three additional contexts that are worthy of mentioning, not in Drucker's text:

1) The problem statement - how does one design a walk around Konigsberg crossing each bridge only once, with no doubling back & ending where the journey began? The additional view of the city provides this context. 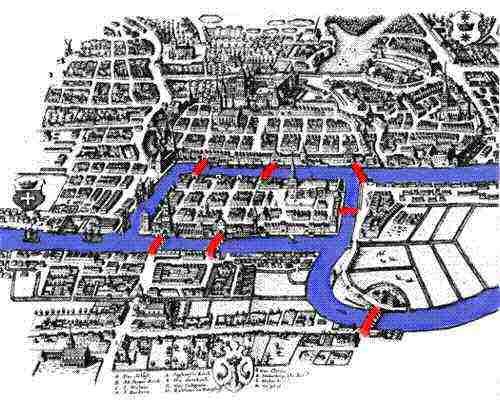 2) Development of theory & language to solve similar problems: As Drucker notes, existing language could not describe the problem or its solution adequately. Euler's solution was the early forerunner of Graph Theory. Graph theory began as a way of recognizing problems as being spatial in nature, and identifying relationships between objects. This image show additional representation of the Konigsberg Bridge problem more abstractly using points, lines, arrows, and labeling. [insert graph view]. Graph theory has its own set of vocabulary ("edges", "verticies", "nodes", etc.).

3. Additional example uses of graph theory, more closely related to the original bridge problem: Explaining "Lattice formed by atoms in a crystal or the hexagonal lattice made by bees in a beehive" to "finding a way to escape from a maze or labyrinth". Full article here.