The predominant concern of this first chapter in Dr. Drucker’s work is an inquiry into a potential formalisation of the manifold techniques, concepts, and elements of visual forms as a whole. The metaphor of “language as a formal system” undergirds Drucker’s progression through the history of graphic design, her attention focused most clearly on the ways that “systematic use of visual images [create] standards and consensus”, with formalised rules employed to codify information visually (24-26).

And from a historical and cultural context, Dr. Drucker provides a reasonably comprehensive account of the manifold attempts at the formalisation of a language for graphic design. The history presented clearly maps out an evolving and developing body of understanding of what such a metalanguage necessitates, in terms of universal formal principles and tenets to be espoused within a systematic approach to theory (29, 31, 35).

Where I find myself most uncertain with regards to this reading, and where I’m most interested in hearing from my classmates with formal backgrounds in design, are the passages in which Dr. Drucker most directly ties this pursuit of a formalisation of graphics to the explicit definitions of formal systems. At these certain points, she fully extends the central metaphor of a graphical “language” into a literal comparison with the concepts of syntax and semantics of such a logical calculus.

Dr. Drucker first draws a direct connection between certain terms and principles of graphic design with semantic and syntactic function, and when later regarding Owen Jones, she characterises his The Grammar of Ornament as displaying these syntactic and semantic modes in its “continuous…repeated units and patterns” and in its “iconographic elements [and] figures”, respectively.

The question which most interests me is that of how closely does the metalanguage provisioned by Dr. Drucker’s account hew to formal languages in actuality? I am unconvinced, or at least uncertain, of the correlate between the codification of graphic design to formal grammar/syntactical structures, and operational dynamic semantics, of functional, logical, and computational languages? 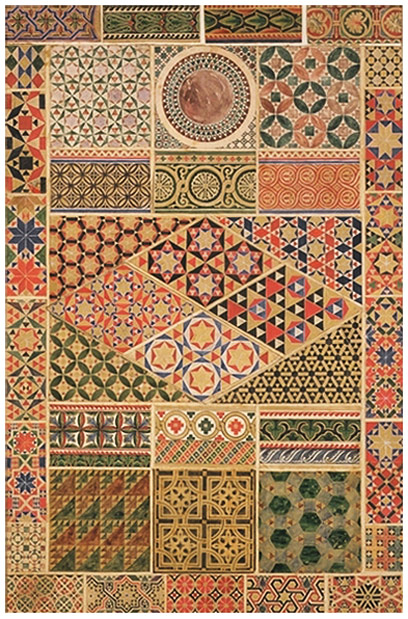 Post Image: Owen Jones, The Grammar of Ornament - "Byzantine No. 3"'